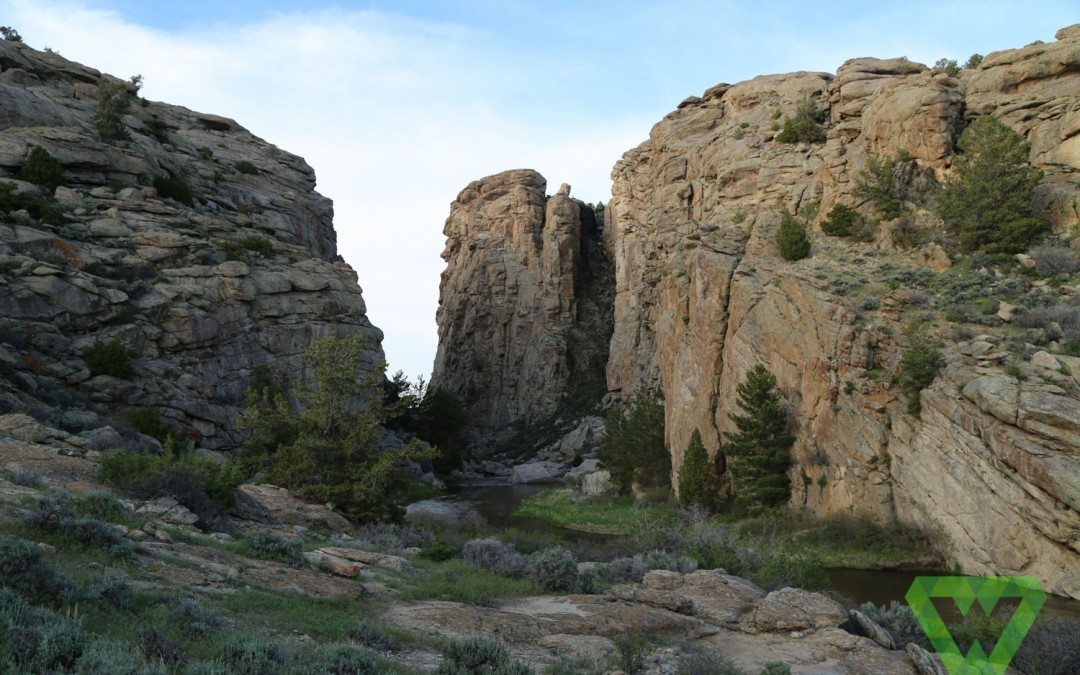 As a kid, I heard a story about a pioneer handcart company that was so beaten and worn from their winter handcart journey that they couldn’t finish the last leg of their trip to the Salt Lake Valley. What makes this story different from the Donner party was the rescue team sent out to help the Martin Handcart Company home.  Three young boys actually carried pioneers across the almost frozen river.  The three boys died soon after from the winter conditions. 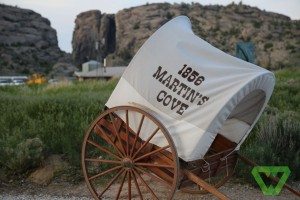 On our way to Casper we realized we’d be passing by Martins Cove, a historic landmark where that story took place.

Martin’s Cove is a special piece of history.  We had the opportunity to walk in the tracks of the Mormon pioneers who crossed the Platte River and sacrificed the precious possessions- even the loss of loved ones- to join the other Latter-Day Saint members who were living in the Salt Lake valley at that time.  It was here that two handcart companies- under the direction of Captain Edward Martin and James G. Willie- met the pioneers and delivered aide to them in a time of desperation and need.  They had started their journey too late in the year.  They suffered great losses and were held up in multiple Wyoming winter storms.   With 145 deaths (30% died) this became one of the largest handcart tragedies in pioneer history.

From Salt Lake, Mormon Prophet Brigham Young said, “…many of our brethren and sisters are on the plains with handcarts, and probably many are now seven hundred miles from this place, and they must be brought here, we must send assistance to them…. To save our brethren that would be apt to perish, or suffer extremely, if we do not send them assistance…. Go and bring in those people now on the plains. – (address given by Brigham Young October 5, 1856.) 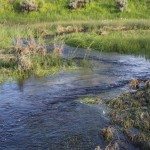 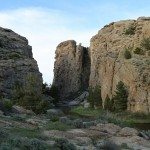 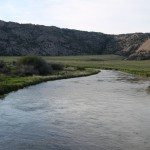 The wind was so intense and blizzard so bad that they had to move their camp from the open plains to an outcropping that would help shelter them from the wind. To get to the “shelter” the pioneers would have to cross the 15 foot wide 5 foot deep Sweetwater river.  Some grown men feel to their knees not able to cross another river (they had a similar crossing just days before which was the cause of so much sickness).  Three or more younger teenagers picked up the weak and hand-carried them across the river.  They went back and forth until everyone that couldn’t ford the river themselves had been carried over.  It was so cold that some of those young boys died.

Martins Cove is located about 45 minutes southwest of Casper, Wyoming… just off of Hwy 220.  The entrance is marked by a ranch-style sign.  Upon entering the park, there’s a visitor’s center about a half of a mile down the road.  It’s open 8:00 a.m.-7:00 p.m.  However, during the winter, it’s opened from 9:00 a.m. to 4 p.m.  There are nice restrooms/ drinking fountains, a gift shop, a historic fort, a homestead site, and much more.  LDS missionaries are on site to answer any questions about the facilities, the history of these natural landmarks, the pioneers, and share personal family history stories about their ancestors who treaded through this pass.  The small museum has a theater and lots of maps and visual aids to help you understand how little the pioneers had.  They even gave each of the kids button spinning toy (an old fashioned pioneer toy involving a button and piece of string). 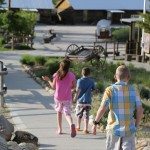 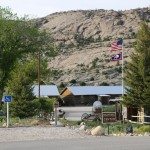 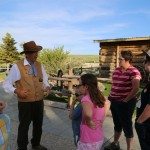 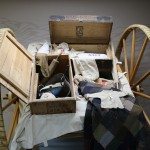 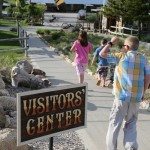 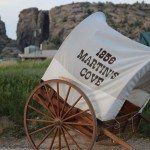 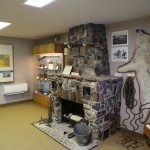 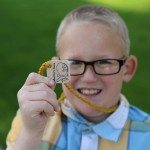 The site contains several handcarts that are used during Trek by LDS youth.  They take turns pushing these handcarts for long distances and camping along the way.  Our kids had the opportunity to take turns pushing a handcart for about a half a mile.  Although the handcarts are not loaded and are pretty light to carry, they can hurt someone if more than one individual is pulling it.  (Yes, we have had experience with this!!!) 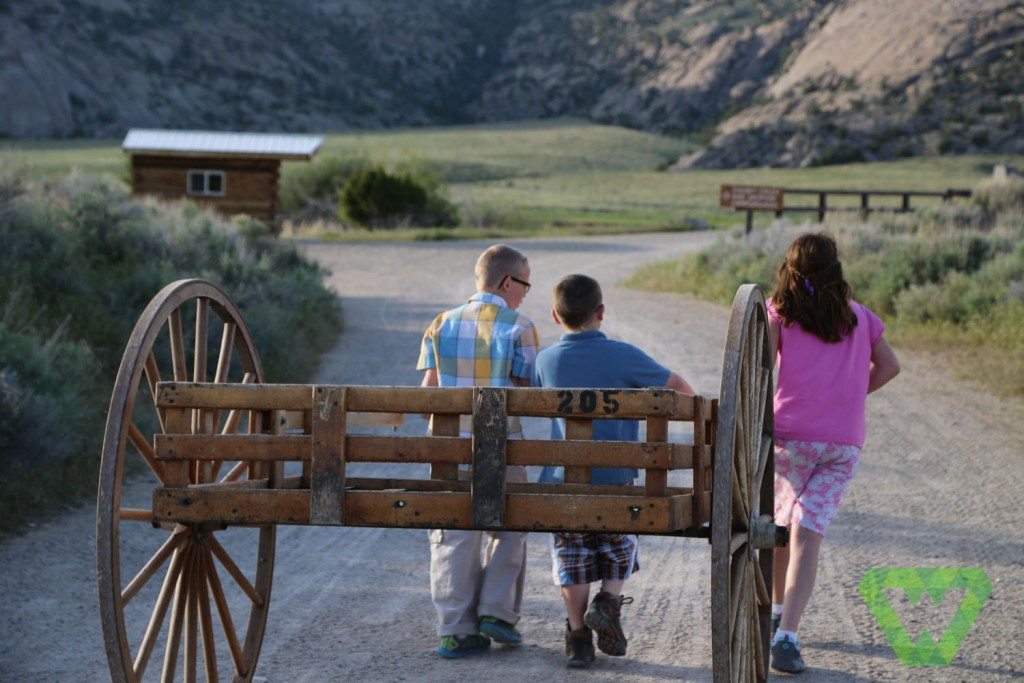 There are a few different trails that you can hike… each with varying lengths and picturesque historic sites.  Check with the missionaries at the visitor’s center for more information on the trails.

We were encouraged to take one of their many handcarts and hike across the Sweetwater River (now with a beautiful bridge) and out across their many trails.  Our family wanted to get closer to a cool rock formation called Devil’s’ Gate so we took our handcart in that direction.  While there are miles of handcart trails we were trying to get to Cheyenne before nightfall and opted for a half-handcart half-walking trail.

Just off the dirt road, there’s a trail that leads to Devil’s Gate- a natural landmark that played an important part in the legacy of the pioneers.  The trail is pretty flat except for the last three minutes, where you can climb a rock to get a better view of Devil’s Gate and the river where the pioneers crossed.  The walk takes about 20 minutes at a calm, steady pace (and another 20 to return).  The grass is pretty tall in some parts and can be a home for some bugs, so we recommend an application of bug spray. Some of our family members got bit by chiggers- they’re like mosquitos but are found near running water.  It’s also a great place for wildlife during the summer. The kids (especially the boys) were thrilled to see two rabbits and a deer along the trail.  Thankfully, we didn’t see any snakes! 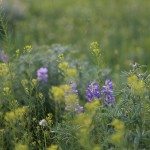 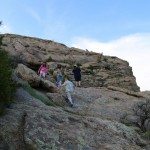 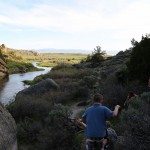 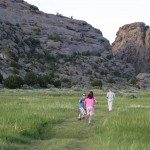 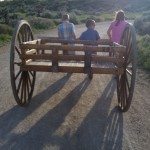 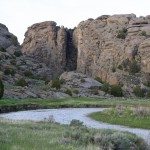 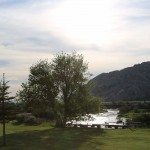 Independence rock is also nearby where pioneer crossing the Oregon, Mormon, and California trails etched their names onto the rock.